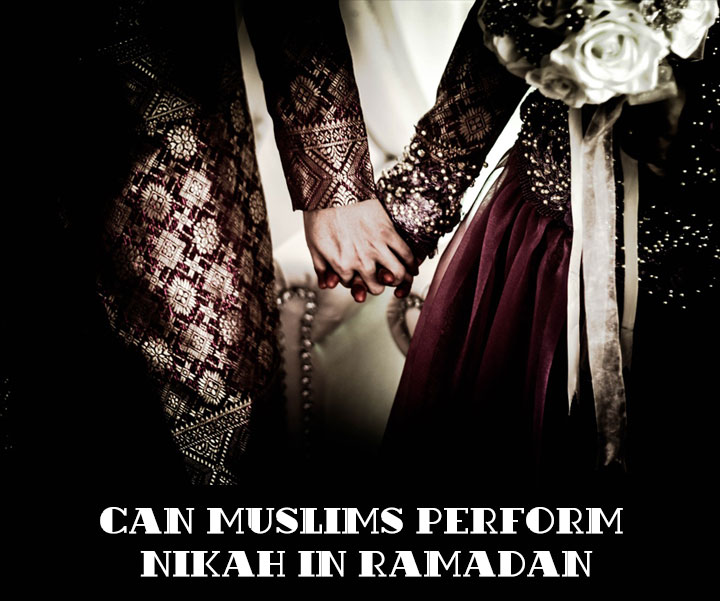 Can Muslims perform Nikah in Ramadan?

Nikah can happen in Ramadan and there is no harm in it to tie the knot between two people in the month of Ramadan except the days of hajj. However, a person must be careful of things that are forbidden. Fasting in Ramadan means that abstaining from eating, drinking, and having sexual intercourse from dawn to sunset. There really is nothing harming in getting married during Ramadan if anyone can maintain self-control throughout the fast and has no fear of breaking the fast. It has been observed that newlyweds cannot be careful and are afraid of doing something prohibited (intercourse while fasting) and falling into great sin.

What Quran says regarding this matter?

“It is made lawful for you, in the nights of fasts, to have sex with your women. They are apparel for you, and you are apparel for them. Allah knows that you have been betraying yourselves, so He relented towards you and pardoned you. So now you can have sexual intimacy with them and seek what Allah has destined for you and eat and drink until the white thread of the dawn becomes distinct from the black thread; then complete the fast up to the night. But do not have sexual intimacy with them while you are staying in mosques for I‘tikāf. These are the limits set by Allah, so do not go near them. Thus, Allah manifests His signs to the people, so that they may be God-fearing” [translated by Mufti Taqi Usmani].

What Hadith say in this regard?

The legislated expiation is freeing a slave; if he cannot afford that, then he must fast two consecutive months. If he is unable to do that then he must feed sixty poor persons, giving each one half a saa’ (measure of weight) of the staple food of the country.

Even though it is not intercourse, any activity that leads in the discharge of semen breaches the fast. Violations of the holy month's sanctity, as well as invalidating fasting, are severe offenses. Since fasting was invalidated by the deliberate discharge of semen, compensation fast is owed for the day on which an individual discharged semen without penetration.

Thus, marriage or nikah is not forbidden in the month of Ramadan but it is better to perform nikah in other months than Ramadan. For the reason that Ramadan is the month where Muslims should only connect to Allah and there should be no other diversion for Muslims which can distract Muslims from worshipping Allah. And usually, newly married couple are enjoying their lives a lot that they pay a lot of attention on their new life. Therefore, if there is no urgency then Muslims should go for nikah in other months than Ramadan.