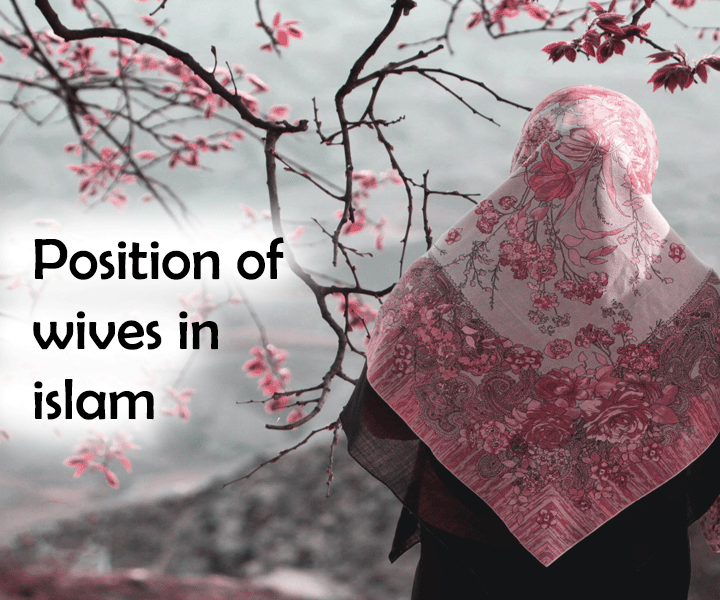 Position of wives in Islam - NikahExplorer

Teachings of Islam about the positions of Women as Wives

“O you who have believed, it is not lawful for you to inherit women by compulsion. And do not make difficulties for them in order to take [back] part of what you gave them unless they commit a clear immorality. And live with them in kindness. For if you dislike them then perhaps you dislike a thing. Indeed! Allah makes therein much good” [4:19].

What does Islam says about Relation with Wives

Islam instructs the believers to treat their wives in a kind and caring manner. It has restricted polygamy to a maximum of four and that too on the condition of equal treatment and justice.

The Quran says in this regard:

“Marry women of your choice, two or three or four but if you fear you shall not be able to deal justly, then only one” [4:3].

Also, Islam has encouraged marrying one time if there is no need because a person cannot do justice when he has more than one wife.

The prophet demonstrated how to do justice with all wives by dividing time between them in a way that none could have any grievance.

Men have been ordained to earn in order to support their wives and children. As Quran says, “Men are maintainers of women” [4:34].

On the other hand, a husband cannot force his wife to share the economic burden in case if she is earning on her own. Muslim husbands are also required to pay the dower money to their wives before approaching them.

There are well defined rules related to divorce though it remains an undesirable act in the sight of God. There are no restrictions on remarriage of widow. The Prophet Mohammad’s (P.B.U.H) most beloved wife Khadija was a widow and she has been in marriage prior to her marriage with the Prophet (P.B.U.H).

The Quran mentions the issue in following words:

“When you divorce women and they fulfil the term (IDDAH) then do not prevent them from marrying again” [2:232].

Islam is the most beautiful and religion of justice. Islam has not bounded anyone in terms of forcing someone. Similarly, Islam has allowed women to spend their lives the way they want to. However, some limitations and guidance which Islam has prescribed for Muslims (both men and women) are for the betterment of humans.

In Islam if, in case a wife has a valid complaints against the husband, she can seek divorce through a court of law. This right of women is called “Khula” in Islam.

What does Quran says about Wives’ Attitude toward their Husbands

Wives are also required to be a source of comfort for husbands and share their burden in running the family affairs smoothly. The Quran sums up this set of bilateral rights and responsibilities in this way:

Moreover, Muslim wives need to learn lessons from Hazrat Khadija and other wives of the Prophet (P.B.U.H) who have played the role of loyal wives to their husband. The Prophet (P.B.U.H) in his farewell sermon issued a set of instructions about relations between men and women: