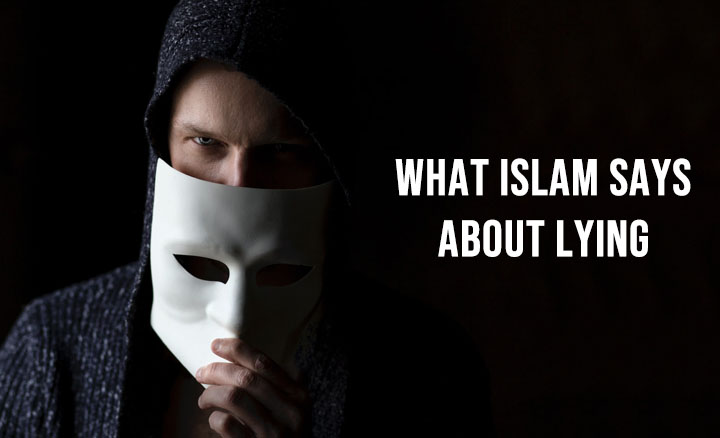 What Islam says about Lying - NikahExplorer

What Islam says about lying?

Lying is indeed the most discouraged thing because lying weakens every relationship, particularly the relationship of marriage. However, sometimes it happens that lying saves the relationship and that lie does not come under the umbrella of deception; hence, that lying is permitted in Islam. For example, as the following hadith says regarding lying:

In a well-known narration, the Messenger of Allah ﷺ said: “It is not lawful to lie except in three cases: something a man tells his wife to please her, to lie during war, and to lie in order to bring peace between the people.” [Tirmidhi]

From this hadith, philosophers concluded that lying to one's partner is acceptable if the act will strengthen their mutual love and attachment. For instance, a lady might tell her husband, "You are the greatest cherished man to me," in an effort to save their relationship. It is okay to offer these encouraging words with the goal of deepening his love for her, although if she doesn't truly have this feeling in her heart.

One of them is not permitted to lie constantly as a result of this permission. Only in cases of Settlement is it acceptable; otherwise, lying—whether done in joke or with sincerity—is abhorrent and deserving of condemnation.

What Islam says about Honesty?

Honesty is the most likeable deed by the Allah and His Prophet Mohammad (P.B.U.H). Allah loves those who are honest towards other people in this world. Dishonesty leads to hypocrisy and Allah says in Quran about the hypocrites that:

“The hypocrites, both men and women, are all alike: they encourage what is evil, forbid what is good, and withhold ˹what is in˺ their hands. They neglected Allah, so He neglected them. Surely the hypocrites are the rebellious” [9: 67]

Hence, it clearly states that Allah likes those who are honest and who speaks truth. As Allah has mentioned in the following verse:

I did not hear the Messenger of Allah (May peace be upon him) giving permission for telling any lies except in three matters.

Being Honest brings Peace to the person

Honesty is a freeing attribute. Even though it can be challenging or emotionally taxing at times, being honest is much more enlightening than telling or living lies. By being honest, we are not needed to worry about keeping track of who we lied to or if our past deceptions would come to light. We will not feel guilty for using words that are not even truly meant by us.

There ought to be no exceptions to the principle of honesty, yet being honest does not mandate self-harm or justify injuring others.

No Muslim, for instance, should publicly display his immoral behaviour or history. It was narrated that Saalim ibn ‘Abd-Allah said: I heard Abu Hurayrah say: I heard the Messenger of Allah (P.B.U.H) say:

“All of my Ummah will be fine except for those who commit sins openly. Part of committing sins openly is when a man does something at night and Allah conceals it, but in the morning he says, ‘O So-and-so, last night I did such and such.’ His Lord had covered his sin all night, but in the morning he removed the cover of Allah” [Narrated by al-Bukhaari, 5721; Muslim, 2990]”.

Lying is harmful most of the times

Lying is harmful because most of the times people lie to let other person down and most of time people suffer the image of another person by lying. People also lie to defame another or to spoil the respect of another person. For example, if a person is jealous from another then he/she better tries to ruin the image of other by either doing backbiting of others or by putting unnecessary blames. Islam has condemned both backbiting and blames. Indeed! It is a great sin and by dong such sinful deeds, a person put his own self in harm.

Allah says in Quran, in the following verse that:

“Indeed, those who love to see indecency spread among the believers will suffer a painful punishment in this life and the Hereafter. Allah knows and you do not know [24: 19] ”

All of the above verses and hadith clearly state that lying is never a good thing because it carries many disadvantages and punishment. Since, Islam is the religion of peace; therefore, for the sake of peace and harmony among people, Islam has allowed Lie in certain situations (only where truth can spoils relationships).

Thus, a detailed understanding the knowledge of Islam is very important in order to lead a careful life as per teachings of Islam.