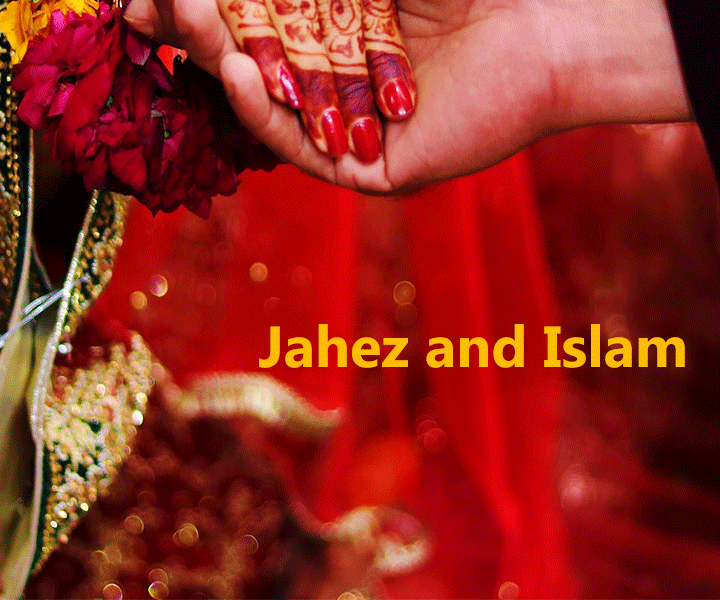 Concept of Jahez in Islam - NikahExplorer

Jahez is not any terminology which is discussed in Islam; however, jahez is the custom of subcontinent. It is so sad that Muslims have adopted this culture from other religions without studying their own religion “Islam”. Islam never put burdens on anyone and Islam is the easiest religion in the world. Islam consists of norms and values which must be beneficial for humans and Islamic values are never based on anything with no particular rationale.

Jahez an Imitation of Hindu Culture

It is a re-enactment of ancient Hindu society, in which daughters have not been given a portion of the family property but instead were compensated with money, some of which could be in the form of items (like dowry). However, as far as Islamic culture is concerned then daughters are given a rightful portion of their family's property and inheritance.

Dowry is a sum of money, assets, or property given to the bride by her family at the time of her wedding in way to lure a suitable husband for her. When man marries her then dowry and woman both become the husband's or his family's property. This is a completely un-Islamic behaviour. Women are not the property of their families in Islam, and they should not be traded like a commodity.

Jahez is Humiliating and Insulting Practice

Jahez is an insulting practice and also an incredibly sad and deplorable behavior that we see getting committed every day in our societal structure. The bridegroom's family has made it a sick and merciless but normal tradition to demand a particular sum of money (or other valuable objects) from the bride or her family, without which the marriage becomes difficult to take place. The tragedy of this heinous practice is that many women are unable to marry because their families are unable to meet the bridegroom's enormous list of demands.

It should be okay to not afford everything but because of this dowry culture, it has been made an insult, if a girl’s parents cannot afford the dowry. Thus, the girl bears insulting taunts from her in-laws after marriage, just because she has not taken a truck of goods with her, in jahez.

Making everything a demand and a manner of exploiting the bride's father, is nothing less of an unethical and corrupt act that must be opposed and avoided by all aspects of our culture. The marriages of the Prophet Mohammad's (P.B.U.H) four daughters have been attended by the Prophet. When his daughter Hazrat Fatimah (R.A) married Hazrat Ali (R.A), he gave her several gifts, but there is no record of him giving anything to his other daughters on their wedding days. In addition, the items given to Hazrat Fatimah (R.A) were also very simple household items.

Thus, the above act of Prophet Mohammad (P.B.U.H) shows that if parents of bride want to give anything out of their own will and happiness then they can, there is no restriction about that. Because parents can do anything for their daughter until there is no pressure or burden on them. However, doing something under the pressure of society is completely another story which cannot be justified by anything.

What Quran says in this regard?

As Allah says in Quran, in Surah Al-Nisa, Verse 34:

“Men are in charge of women1 by [right of] what Allah has given one over the other and what they spend [for maintenance] from their wealth” [4:34].

The above verse states that the financial responsibility of wife is over the man. Hence, men are the maintainers of women; thus, instead of sitting and demanding from their wives regarding each and every house item they should work to get items and goods by their own for their home.

The above statement doesn’t mean that men should be burdenized; however, women should also understand the responsibilities of their husbands and women should also be happy in what they are given, rather complaining and demanding from their men.

“So righteous women are devoutly obedient, guarding in [the husband's] absence what Allah would have them guard” [4:34].

Moreover, responsibilities can also be shared by parents of bride and the groom so that no one feels burdened. There is no shame of affording less than the other people around because at least a person is making out of their own money and then Allah put barkat in that what has been earned by hard work.