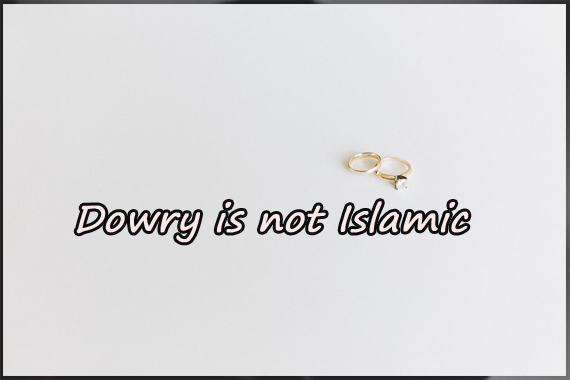 Dowry is not Islamic - NikahExplorer

Despite the efforts of our Prophet Mohammad (P.B.U.H) to raise women to the level they deserve, in many places, still the birth of a girl child remains something to mourn or, to tolerate with perseverance.

For number of reasons, there is gender discrimination in almost all the strata of our society. Girl child is treated inferior because of stereotypes that she would not be able to contribute anything in the family and she can only put burdens, among which Dowry is considered as the huge burden on finances. Traditional custom of dowry (which is given to a girl at the time of her marriage) must need to change now because in the books of the fiqh, no such concepts are mentioned.

The Arabic word 'tajheez', means to prepare someone for a journey, etc. The goods prepared are called 'jahazun'. From this the Urdu word 'jahez' has been coined. Jahez could be a form of money, goods or possessions given to the bride by the bride's family when she marries. It then becomes the property of the husband or his family after marriage. This is not an Islamic tradition because in Islam marriage is a beautiful practice in which girl should be respected and should not be traded like a material good.

Islam does not stop a father to give his daughter gifts, money, property, or arranging a wedding feast but Islam discourages to fulfill any such demands which exploit the bride’s father. A father who has many daughters is constantly in debt and the family leads a miserable life which is totally an immoral and corrupt act. Such practices must be condemned by all the sections of society.

The biggest example we have is of Prophet's daughter Hazrat Fatima’s marriage with Hazrat Ali. Hazrat Ali (R.A) came to the Prophet Mohammad (P.B.U.H) and expressed his wish to marry Hazrat Fatima (R.A). The Prophet asked him if he possessed anything to offer as mehr. He replied that he had a horse and a saddle. The Prophet advised him to keep the horse and to sell the saddle. So he sold the saddle for 480 dirhams to Usman and put all the money in front of the Prophet. The Prophet prayed for the well-being of Usman for paying a good price and at the same time gifting the saddle back to Ali. The Prophet then sent for some perfumes and gave the rest of the money for wedding preparations.

The necessary items given to Hazrat Fatima (R.A) were a cot or woven bed, two pillows made of leather, two striped bed sheets, one quilt, two amulets, one goat-skin for carrying water, two pots for water, one hand-grinding mill, one cup and one prayer mat. Items were selected and prepared by the Prophet's family, but the cost was borne by the groom.

This is the way marriage needs to be done. Marriage is a bond shared by two people and their families, and then the expenses must also be shared by both parties. It is unethical and immoral that only the father of bride bears all the expenses. Prophet Mohammad (P.B.U.H) said:

“The best nikah is one in which the least amount has been spent”.