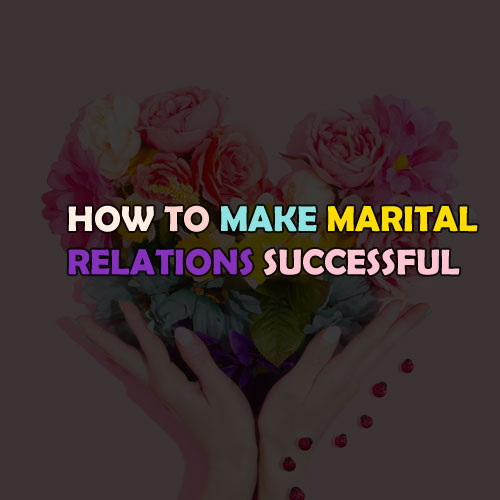 How to Make Marital Relations Successful

Everyone wants to make their relationship successful. But unfortunately some relations do not live long. Why after a period of time some spouses want to get separated and unable to tolerate each other anymore? Some people after separation think about the reason that why and how their relation ends and some of them regret on their actions. But the question is why they could not save their relation. What are the ways by which someone could make their relation successful?

Marital relation is not like other relations. For example we can make and break friendships but when it comes to your spouse then it is not easier to break a bond with your partner. As this relation has great importance in Islam and Allah has considered it as the precious relation. Thus, it is our duty to save this relationship until or unless there could be valid reason for separation.

Many times husband and wife conflict on financial problems, domestic violence, parenting, interfaith marriage issues, and lack of domestic skills. If such disputes are not resolved correctly, they can escalate to harmful results.

Islam teaches us that how we can tackle marital problems and what are the solutions to solve them. Islam does not allow things that may cause problem after marriage like interfaith marriages, forceful marriages etc.

This verse shows that Allah strictly forbids interfaith marriages because He is well known about their ultimate results. If husband and wife belong to two different religions then their way of living and beliefs would contradict which can cause multiple problems and troubles. It does not imply that Islam restricts love marriages; however, it gives full freedom to man and woman for marriage and allows them to choose their partners but the religion of both should be same.

In Hadith it is narrated by Abdullah Ibn Abbas (R.A) that the Holy Prophet (PBUH) said that:

“If a woman wants to marry and is already a divorcee or widow, her right of free consent and free choice is superior then the right of her guardian. If she is not previously married and this is her first marriage even then her parents or other guardians cannot enforce their choice on her. They are not allowed to force her to marry any one against her free choice and free consent” [Sahih Bukhari].

Allah instructs men in Quran to be nice with their wives and to treat them the best of their ability. Islam gives guidance to husband and wife to be kind with each other, respect each other and tells us that the best in men is the one who is kind and who never misbehave with his wife. Sweet and kind behavior always reflects to other people. Hence, if one is treating nicely the response towards the other is also same.

"The most perfect believer in Islam is the one who is best in character. The best of you are those who are better to their women". [Al-Tirmidhi]

Allah says in Quran that woman should be obedient and guard her husband’s property and honor in his absence. As husband goes outside to earn money for his wife so it is her responsibility to protect his home and respect.

“Men are the protectors and maintainers of women, because Allah has given the one more (strength) than the other, and because they support them from their means. Therefore, the righteous women are devoutly obedient, and guard in the (the husband’s) absence what Allah would have them guard. As to those women on whose part you fear disloyalty and ill-conduct, admonish them (first), (next) refuse to share their beds, (and last) do dharb (have separation); but if they return to obedience, seek not against them means (of annoyance) for Allah is Most High, great (above you all)” [4: 34].

Allah clearly mentions their (husband and wife) duties in Quran, now it is upon them that how they fulfill their responsibilities. If they follow Allah’s command and properly did their job it results in better life. In this way, marital relations would be successful and never break till the end of life. Marital relations are good for physical health as well as mental. Half of the world’s population suffer from depression and the cause is the separation of spouses, some regret on their separation, some think about the reason that why their relation ends, some does not handle their loneliness and some lost in their past memories. All of mentioned verses and hadiths tell us the importance of marital relationship and Allah has given many solutions in Islam to save this beautiful bond.