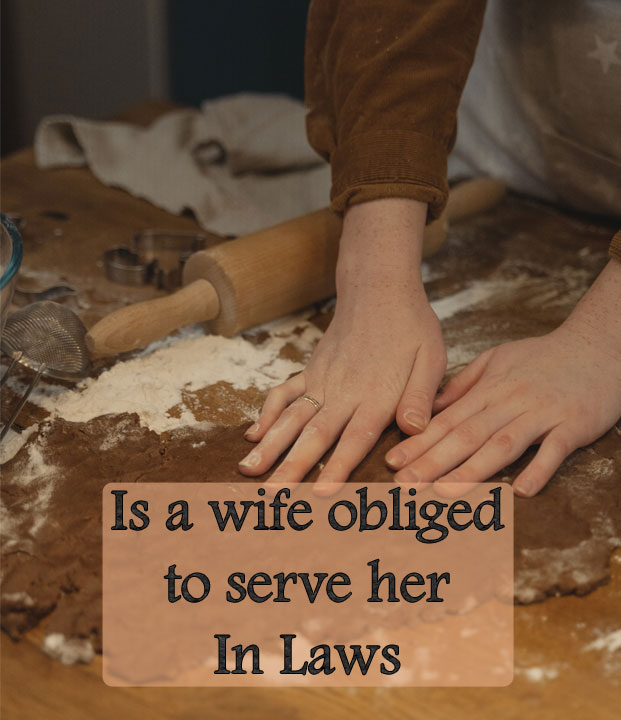 Is a wife obliged to serve her In Laws - NikahExplorer

As far as the matters of husband are concerned so it is must be on a wife to obey the husband in all respects until he is not demanding something impropriate or sinful. As Allah has explained in Surah An-Nisa, verse 34:

“Men are the caretakers of women, as men have been provisioned by Allah over women and tasked with supporting them financially. And righteous women are devoutly obedient and, when alone, protective of what Allah has entrusted them with.1 And if you sense ill-conduct from your women, advise them ˹first˺, ˹if they persist,˺ do not share their beds, ˹but if they still persist,˺ then discipline them ˹gently˺.2 But if they change their ways, do not be unjust to them. Surely Allah is Most High, All-Great”. [4:34]

It is not permissible for any of your in-laws to enter your room without your permission, as Allah says:

“O believers! Do not enter any house other than your own until you have asked for permission and greeted its occupants. This is best for you, so perhaps you will be mindful” [24:27]

If any of them enters your room with your permission but he is not one of your mahrams – such as your husband’s brother – then there has to be one of your mahrams present, so that there will be no haraam khulwah between you (i.e., being alone together). You must also observe full shar’i hijab, and be certain that there is no risk of falling into fitnah (temptation).

Despite all these conditions, it is still better for him not to enter upon you in your room; this is purer for the heart and farthest removed from suspicion. Allah says in Quran:

“And when you ˹believers˺ ask his wives for something, ask them from behind a barrier. This is purer for your hearts and theirs. And it is not right for you to annoy the Messenger of Allah, nor ever marry his wives after him. This would certainly be a major offence in the sight of Allah”. [33:53]

What Hadiths say in this regard?

Al-Nawawi (may Allaah have mercy on him) said:

With regard to the Prophet’s words “The in-law is death,” what this means is that there is more fear with regard to him than anyone else, and evil is to be expected of him, and the fitnah (temptation) is greater because he is able to reach the woman and be alone with her without anyone denouncing that, unlike the case of one who is a stranger. What is meant by “in-law” (hamu) here is the relatives of the husband apart from his father/grandfather and sons/grandsons. Fathers/grandfathers and sons/grandsons are mahrams for his wife and it is permissible for them to be alone with her. The word “death” here does not refer to them. Rather what is meant is the brother, brother’s son, paternal uncle, cousin, etc, who are not mahrams. People are usually careless about this matter and a man may let his wife be alone with his brother. This is what is referred to by “death” and should be prevented more than her being alone with a stranger for the reasons mentioned above.

They do not have the right to force you to do any of the things you mention, such as how to cook, how to dress or other things such as working and teaching etc, unless that is by way of advice and kind treatment, not by way of compulsion.

It is not permissible for them to interfere in your and your husband’s private affairs, but if they convince your husband not to go out on trips and he tells you to stay in the house, then obey your husband, and be patient and seek reward.

They do not have the right to know the details of your life (you and your husband), and it is not permissible for your husband to tell them of any private or intimate matters between the two of you.

Your husband has to honour his parents, and you should help him in that. You should not be the cause of a split between him and them. You will see the consequences of that in your children in sha Allah.