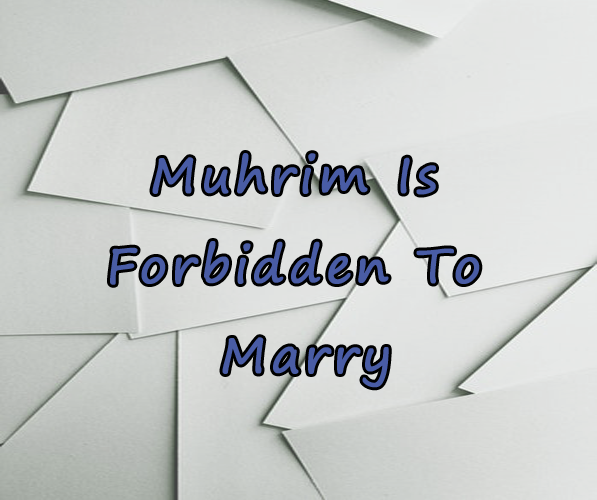 Muhrim Is Forbidden To Marry - NikahExplorer

Marriage is a social institution as old as the human race itself. It may be defined as a relation between a man and a woman who is recognized by custom or law and involves certain rights and duties, both in the case of the parties entering the Union, and in case of the children born. Marriage has thus two main functions to perform: it is the means adopted by human society for regulating relations between the sexes; and it furnishes the mechanism by means of which the relations of a child to the community are determined.

But there are certain limitations too, to form this bond of marriage. In Sahih Muslim, book 8, Kitab-al-Nikah (The Book of Marriage) it is mentioned in chapter 5 that Muhrim is forbidden to marry.

Nubaih b. Wahb reported that 'Umar b. Ubaidullah intended to marry Talha b. 'Umar with the daughter of Shaiba b. Jubair; so he sent a messenger to Aban b. Uthman to attend the marriage, and he was at that time the Amir of Hajj. Aban said: I heard 'Uthman b. 'Affan say that Allah's Messenger (May peace be upon him) had stated: A Muhrim must neither marry himself, nor arrange the marriage of another one, nor should he make the proposal of marriage. (Book 8, Number 3278)

Nubaih b. Wahb reported: Umar b. Ubaidullah b. Ma'mar sent me to Aban b. Uthman as he wanted to make the proposal of the marriage of his son with the daughter of Shaiba b. Uthman.He (Aban b. Uthman) was at that time (busy) in the season of Pilgrimage. He said: I deem him to be a man of the desert (for it is a common thing) that a Muhrim can neither marry, nor is he allowed to be married to anyone. It is Uthman (b.Affan) who reported this to us from Allah's Messenger (may peace be upon him).

'Uthman (b.'Affan) reported it directly from Allah's Apostle (May peace be upon him) that he said: A Muhrim should neither marry (in that state) nor make the proposal of marriage. (Book 8, Number 3281)

Ibn Abbas (Allah be pleased with them) reported that Allah's Apostle (May peace be upon him) married Maimuna in the state of Ihram. Ibn Numair made this addition: "I narrated it to Zuhri and he said: Yazid b. al-Asamm (Allah be pleased with him) told me that he (the Holy Prophet) married her when he was not a muhrim." (Book 8, Number 3283)

Ibn 'Abbas (Allah be pleased with them) reported: Allah's Messenger. (May peace be upon him) married Maimuna while he was a Muhrim. (Book 8, Number 3284)

Whereas, this statement has been cleared in the very next narration,

Yazid b. al-Asamm reported: Maimuna daughter of al-Harith narrated to me that Allah's Messenger (may peace be upon him) married her and he was not in the state of Ihram. And she (Maimuna) was my mother's sister and that of Ibn 'Abbas (Allah be pleased with them). (Book 8, Number 3285)

Hence, all of the above mentioned narrations from Sahih Muslim show that it is prohibited to marry when you are in the state of ihram.