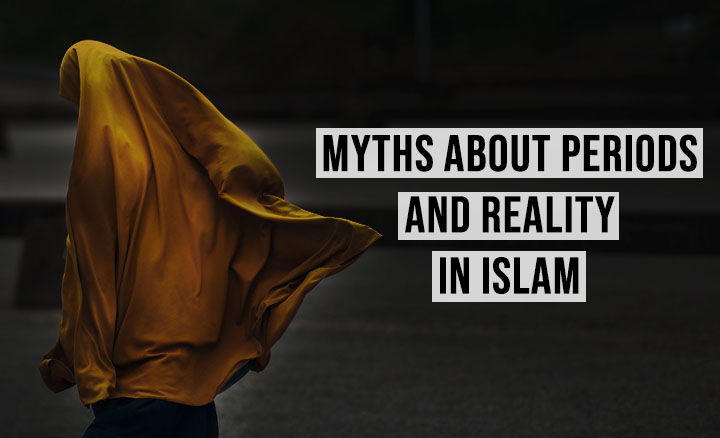 Myths about Periods and reality in Islam - NikahExplorer

Firstly, and obviously, it is indeed important to realize that menstruation is neither a terrible disease nor a way for women to be punished for anything they did. Islam, on the other hand, sees menstruation as a normal bodily process.

Biologically, a woman who is unable to menstruate cannot become pregnant. A woman can conceive throughout the years between her menstrual cycles, which endure for a set number of years.

It is also important to understand that if menstruation is a punishment, then why Allah has given three times more importance to mother? And, undoubtedly periods are related to motherhood.

In short, menstruation is necessary for maternity, and considering that Islam places such a top importance on motherhood, it disproves the notion that a woman's menstruation is a punishment or has any negative humiliating significance.

What Hadith says about certain myths about periods?

Before the prophet (PBUH), males used to avoid their wives during their periods and maintain a distance from them. They did not even approach them for sitting with them, eating with them, etc. Such men used to let their women dine or drink alone. Hence, this used to be a myth among people of no knowledge.

Therefore, the companions asked the Prophet (PBUH) about this above-mentioned practice, and he responded:

“Do everything with her except for sexual intercourse.” [Sahih-Muslim]

The hadith mentioned above indicate clearly to Muslim men and women that a husband must treat his wife kindly irrespective of whether she may be menstruation. For Allah's sake, they must maintain their lives together as a couple rather than ignoring or avoiding her. Nothing is prohibited between the two, they can cuddle, spend time together, enjoying each other's company, going outside, and making jokes.

Examples of Prophet Mohammad (PBUH) with his wives

• Aisha (Allah be pleased with her) said, “The Prophet (Allah bless him and give him peace) would recline on my lap while I was menstruating and he would read the Quran.” [Bukhari]

• She also said in another narration, “I would drink while menstruating, then pass the vessel to the Prophet (Allah bless him and give him peace). He would place his mouth on the (same) place as my mouth and drink….” [Muslim]

• In another instance Aisha (Allah be pleased with her) said, “The Messenger of God (Allah bless him and give him peace) said to me, ‘Get me the prayer mat from the prayer area.’ I replied, ‘I am menstruating.’ He said, ‘Verily, your menstruation is not in your hand.’ [Muslim]

Women can make dua and zikar during periods

Women shouldn't consider it a hassle or maybe something filthy, but rather a normal function of the body.

When it comes to prayer, women are ritually unclean at the moment, therefore they must clean up before praying. Once the menstruation is over, women can start regular prayers. However, they should keep in mind that they are still free to make dua or recite whatever they recall, and they can continue to remember Allah on a daily basis (swt).

People should not consider menstruation as shame

Periods are not something to be embarrassed of; in fact, they allow women the opportunity to enjoy one of humankind's greatest precious experiences: motherhood.

Women should obey it as it is Allah's plan as He has designed it for them. The fact that the periods give women to experience the joy of becoming mothers and provide them a break through fasting. Hence, it must be viewed as a blessing by women. Moreover, men should also respect this and they should special treat and care their women during periods.