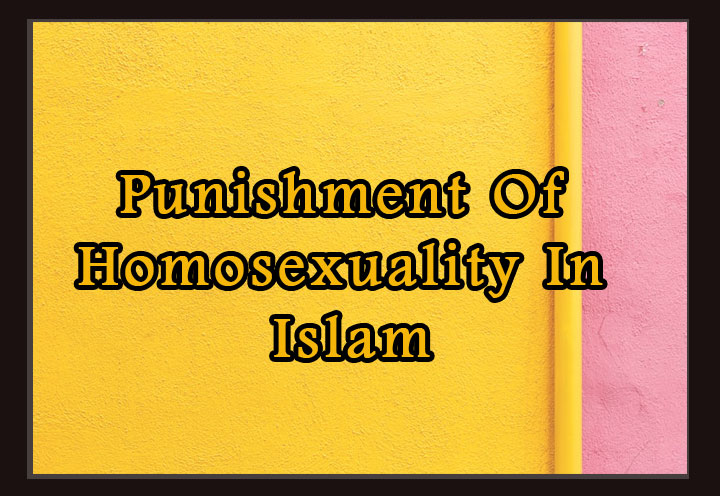 Punishment Of Homosexuality In Islam - NikahExplorer

LGBT come into existence when people end up having the heterosexual relationships and they want to try something out of the context. It is purely psychological and not natural. Such people engage themselves in lustful acts with the same gender and this is how their psychology forms. These kinds of acts go against the natural disposition which Almighty Allah has created in humans and in Animals as well.

Homosexuality is not only forbidden in Islam but Allah has mentioned the severe punishments for those who feed their souls (nafs) by indulging themselves in homosexual activities. Quran narrates the story of the era of Hazrat Lot (A.S), that how Allah has destroyed them destructively just because they were involved in the lustful acts with same gender. The following verses of Surah Al-Araf speak the story of punishment Allah has given to the people of Lot (A.S):

“Indeed, you approach men with desire, instead of women. Rather, you are a transgressing people. But the answer of his people was only that they said, "Evict them from your city! Indeed, they are men who keep themselves pure. So We saved him and his family, except for his wife; she was of those who remained (with the evildoers). And We rained upon them a rain [of stones]. Then see how the end of criminals was”. [7:80-84]

The punishment has been discussed in Surah Hud as well, Allah says:

“So when Our command came, We made the highest part (of the city) its lowest and rained upon them stones of layered hard clay (which were), Marked from your Lord. And Allah 's punishment is not from the wrongdoers (very) far”. [11:82-83]

Allah has mentioned this in Surah Al-Anbya: 74, Surah Al-Haj : 43, Surah Ash-Shu’ara: 165-175, Surah An-Naml: 56-59, Surah Al-Ankabut: 27-33, as well. This topic of Homosexuality is so much discouraged in Islam that Allah has repeated the punishment of the wrongdoers in many chapters of the Quran.

The punishment was not for only that time period but it is still an Islamic order to kill that person who is engaged in such unlawful acts, hence there is a death penalty for those who commit adultery or homosexuality. It is narrated in the Hadith collection of Abu Dawud that the Prophet (P.B.U.H) said:

The story of Hazrat Lot (A.S), narrated in the Quran is more than enough, to make us aware that how much disliked and prohibited the homosexuality is. We should try to avoid all those activities which are not allowed by Islam and Indeed! The consequences of forbidden acts are worse than anything. May Allah guide us on the right path (Ameen).