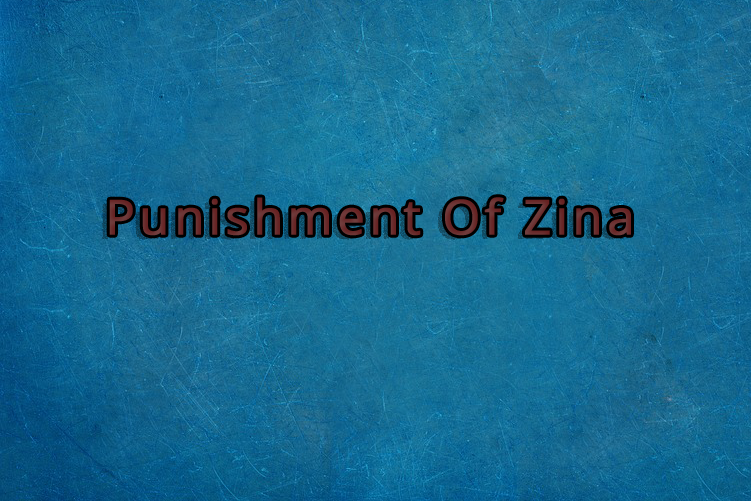 Zina is the most disliked act in Islam and is forbidden (haram). Prophet Mohammad (P.B.U.H) said that adultery is among the biggest sin. It is a shameful and evil act which leads to so many roads to other evils. The word zina` is used in 17:32, 24:3, 25:68, 60:12. In all these verses the only natural way to understand the word is that it refers to illicit sexual intercourse whether committed by a marrid person or an unmarried person. Allah says in Surah Al-Isra, verse: 32

“And do not approach unlawful sexual intercourse. Indeed, it is ever an immorality and is evil as a way”.

One of the effects of zina is that it earns the wrath of Allaah because His sacred limits are transgressed.

When an unmarried male commits adultery with an unmarried female, they should receive one hundred lashes and banishment for one year. And in case of married male committing adultery with a married female, they shall receive one hundred lashes and be stoned to death. — Sahih Muslim, 17:4191.

A man came to Allah's Apostle while he was in the mosque, and he called him, saying, "O Allah's Apostle! I have committed illegal sexual intercourse." The Prophet turned his face to the other side, but that man repeated his statement four times, and after he bore witness against himself four times, the Prophet called him, saying, "Are you mad?" The man said, "No." The Prophet said, "Are you married?" The man said, "Yes." Then the Prophet said, "Take him away and stone him to death." Jabir bin 'Abdullah said: I was among the ones who participated in stoning him and we stoned him at the Musalla. When the stones troubled him, he fled, but we over took him at Al-Harra and stoned him to death. (Sahih Al-Bukhari Hadith - 8.806)

This law of punishment will only apply when the crime is proved either by a confession of the person him/her self, or by four witnesses who actually saw the person in the actual act of zina intercourse.

The punishment of this sin will be much more worst on the Day of Judgment for the zaani (adulterer), unless he seeks sincere forgiveness from Allah during his worldly life.

As Allah says in Quran in Surah Al-Furqan

And those who do not invoke with Allah another deity or kill the soul which Allah has forbidden [to be killed], except by right, and do not commit unlawful sexual intercourse. And whoever should do that will meet a penalty. Multiplied for him is the punishment on the Day of Resurrection, and he will abide therein humiliated. Except for those who repent, believe and do righteous work. For them Allah will replace their evil deeds with good. And ever is Allah Forgiving and Merciful. And he who repents and does righteousness does indeed turn to Allah with [accepted] repentance. (25:68-71)

A woman from Juhaynah came to Allah's Messenger (saws) and she had become pregnant because of adultery. She said: O Messenger of Allah (saws), I have done something for which (prescribed punishment) must be imposed upon me, so impose that. Allah's Messenger (saws) called her guardian and said: Treat her well, and when she gives birth bring her to me. He did accordingly. Then Allah's Messenger (saws) pronounced judgment on her. Her clothes were tied around her and then he gave the order and she was stoned to death. He then prayed over her (dead body). Thereupon Hadrat Umar (r.a.) said to him (saws): O Messenger of Allah (saws), you offer prayer for her although she had committed adultery! Thereupon he (saws) said: She has made such a repentance that if it were to be divided among seventy men of Medina, it would be enough! Have you found any repentance better than that she sacrificed her life for Allah, the Majestic? (Sahih Muslim Hadith 4207).