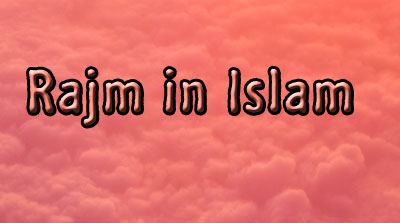 Rajm is an Arabic word and the literal meaning of which is ‘stoning’. It is usually used to refer to the Hudud punishment in which an organized group throws stones at a convicted person before he dies. Committing Sodomy (All non-procreative forms of sex), is considered as haram in the religion Islam.

Rajm for married and unmarried person

The punishment of stoning / Rajm or the death penalty for adultery is a strict law to Islam because it is mentioned in the Quranic about premarital and extramarital prescription. There are separate punishments or rajm for those who are married and those who are unmarried. In surah Nur, verse 2 Allah has described the punishment:

“The [unmarried] woman or [unmarried] man found guilty of sexual intercourse - lash each one of them with a hundred lashes, and do not be taken by pity for them in the religion of Allah, if you should believe in Allah and the Last Day. And let a group of the believers witness their punishment”. [24:2]

However for married man the punishment is death and the death penalty is clearly mentioned in Hadith:

Hence the above hadith and verses state that if a married man commits zina then he should put to death by means of rajm, whereas if an unmarried does the same sin then he deserves the 100 lashes.

Another meaning of Rajm

In Islam, Rajm is also taken as the annual stoning to Satan during the hajj (pilgrimage to Mecca), a religious pre-Islamic Arab practice maintained by the Prophet Muhammad.

Stones which are used during rajm at hajj, should not be broken and stones must be in their actual state. The stones may not be thrown violently and should be not much larger than a lentil so that no harm is caused if someone is struck by accident. Any stones that are collected but not used on the pilgrimage must subsequently be buried, for once they reach the sacred shrine in Mecca, they assume a sacred character.

Although throwing stones at the devil symbolizes the rejection of evil and the dissolution of earthly thoughts, it also protects the pilgrim from evil as he returns to daily life. The sacred sense of rajm is stressed by devout Muslims who promote the recitation of divine formulas as each stone is thrown.

Muslims should avoid committing sins that could lead them to rajm (stoning for illegal intercourse), but they should do rajm when they go to perform Hajj. Hence the meaning of rajm is same but the context is different.