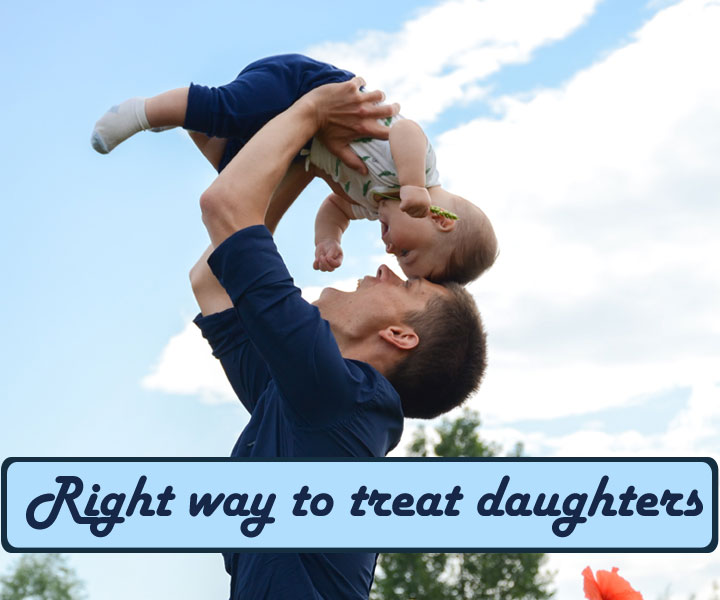 What Allah says in Quran about daughters?

In the above verse, we note that the description of daughters preceded those of sons, as well as the scholars also commented on this quoting:" This is to support daughters or foster affection to them, as by having a daughter, most fathers feel stressed. Even during pre-Islamic period, the common practice of people was to dislike getting daughters, to the point where they might bury them alive. Therefore, it seemed as if Allah is saying that this inferior daughter taking precedence in my system in your estimation. He also first addresses daughters to reflect their vulnerability, and how they are therefore more worthy of care and treatment.

How daughters are taken in pre-Islamic times?

Such respecting of daughters which is asked in Islam is the total opposite to how individuals in the pre-Islamic period were used to dealing with women, as they would be little women and find them something to their riches, and if a baby girl's news came to any of them, that would be like a severe storm hit them; Allah Says in Quran, in Surah An-Nahl, verse 58:

Is beating a daughter allowed in Islam?

If we look at the life of the Prophet Muhammad, there is nothing we can ever find about beating children or women. And because the Prophet Muhammad is the leader of all Muslims, this means that no Muslim is permitted at all to beat any boy or woman.

Never had the Prophet Muhammad scolded his servant. He performed his (servant's) job, on the other hand. He loved one of Zaid’s slaves even more that, when approved and released by the prophet, he declined to join his kin. Together with his grandsons, Hasan and Hussain, his extraordinary love and affection for his daughter, Fatima, is an indication that Wahabis do not like beating their children.

How daughters should be treated?

With the advent of Islam, the darkness of that era vanished and Allah enjoined kindness, love and compassion towards girls. It was encouraged to take good care of girls, as well as to give them special attention in the process of their education. In fact, for raising them, Islam has designated a special reward that is not given for raising sons.

A daughter is a great bounty and an honour granted by Allah, Imaam Al-Hasan said: “Girls are a source of reward and sons are a blessing; rewards are in one’s favour (on the Day of Judgment) whereas one will be held accountable for blessings.”

“He who raises two daughters until their puberty will be with me in Paradise like this” and he symbolized the proximity by showing two of his fingers with a slight gap between them.” (Muslim)

What Hadith says regarding loving the daughter?

‘Aa’ishah, radhiallah ‘anha, related: “A woman by the name of Jameelah came to me with her two daughters. She asked me for charity but found nothing with me except a date, which I gave her. She divided it between her two daughters and ate nothing herself; then, she got up and left. After this, the Messenger of Allah, sallallaahu ‘alaihi wa sallam, came, so I narrated this story to him; he said: “He who is involved (in the responsibility) of (nurturing) daughters and is generous to them, will have them as a fortification for himself against the Hellfire.” [Al-Bukhari & Muslim]

In another narration of this incident, ‘Aa’ishah, radhiallah ‘anha, related: “A poor woman came to me with her two daughters. I gave her three dates; she gave each of them a date and was about to eat the third one when one of her daughters asked her for it, so she divided it between her two daughters and ate nothing herself, and I liked what she did. After this, the Messenger of Allah came, so I told him what she did, and he said: ‘Allah obligated Paradise for her due to this date, and (also) freed her from Hell.”[Muslim]

Prophet Mohammad (P.B.U.H) expressed his love for his daughter by stating the following words:

“(My daughter) Fatimah is a part of me, so whoever angers her angers me.” [Al-Bukhari & Muslim]