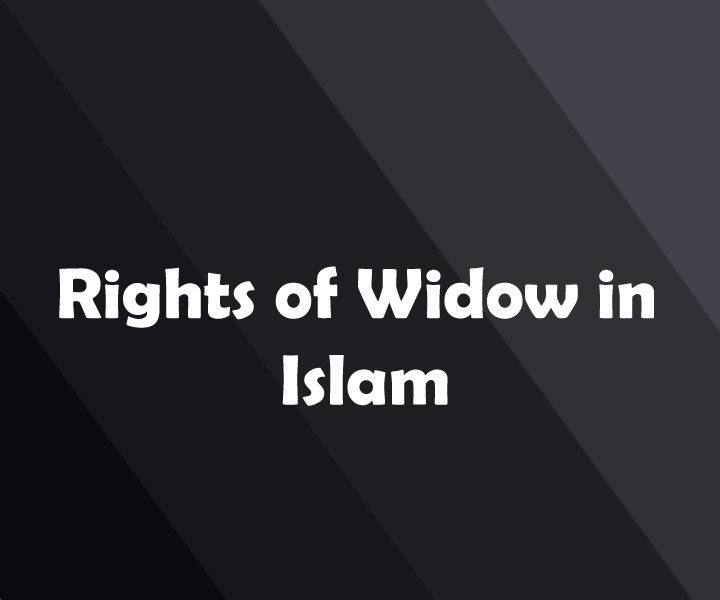 Rights of Widow in Islam - NikahExplorer

The word “widow” defines a woman whose life partner dies and she loses not only her husband but also her lover, father of her children, financial support and the guardian of her home also. Her suffering is emotional as well as psychological because now she is responsible to play a role of both sides as a single parent for her children. Mostly people are not concerned about widows and their hardships but Islam clearly defines the rights of widow in Quran as well as in Hadiths.

God Gives Reward to Those Who Looks After a Widow

God encourages mankind by mentioning His rewards; therefore, society is willing to take care of widows and helping them to ease their difficulties in life. The one who looks after a widow is equal to those who spend their whole life in war for God’s word, the reason behind this statement is that people would not feel burden to help widows but take it as a responsibility and understand that if they give any favor to them, it is the benefit of their own.

It is stated in Al-Bukhari that:

“The one who looks after a widow or a poor person is like a Mujahid (warrior) who fights for Allah’s Cause, or like him who performs prayers all the night and fasts all the day.” [Al-Bukhari]

The financial right of a widow

God declares the financial right of a widow in Surah An-Nisa that if the spouses do not have children then one fourth of her husband’s money which he leaves is the right of his wife and if they have descendants than it would be eighth part of entire wealth.

There is no restriction in Islam on widows for second marriage. Once they complete their time period after the death of her husband which is mentioned in Quran (four months and ten days), then they are free to spend their remaining life as they wish. Islam permits widow to marry again if she wants. The act of accepting widow as a wife is considered as Sunnah in Islam. Our Prophet Hazrat Mohammad (PBUH)’s first wife Hazrat Khadija was also a widow. Allah says in Surah Al-Baqarah, verse 234 that:

“And those who are taken in death among you and leave wives behind - they, [the wives, shall] wait four months and ten [days]. And when they have fulfilled their term, then there is no blame upon you for what they do with themselves in an acceptable manner. And Allah is [fully] acquainted with what you do.” [Surah Al-Baqarah, verse 234]

Thus, all of the above hadiths and verses clearly state that being widow does not mean that the life of that lady is on end now. However, Islam has allowed the widow to start a new beginning with the new partner, if only she wishes. Islam has given complete freedom to people and Islam wants every single person to stay happy in their lives. Islam does not want a person to end his or her happiness on any particular point; rather Islam opens many doors of happiness for a person whose fate has closed one door in his or her life.