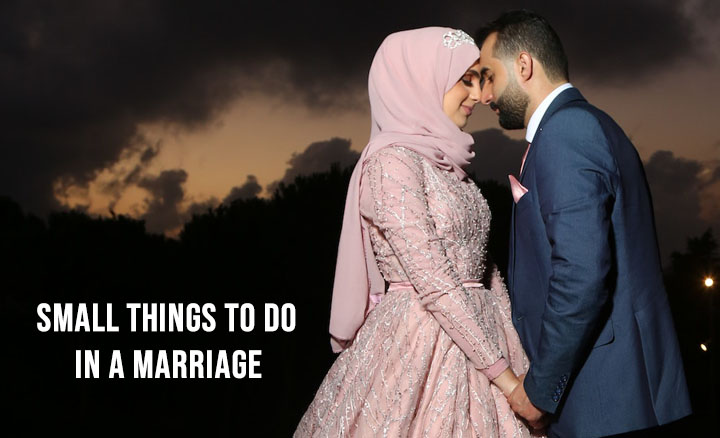 Small things to do in a Marriage - NikahExplorer

Islam places responsibility on the husband upon his wife and vice versa, a few of which are carried by the husband and wife both. Islam never does unjust and thus, Islam has guided both men and women that how they both should treat each other in a particular manner in order to become peace towards their partners.

Despite the fact that many Muslim husband and wife marriages are currently suffering and heading for divorce with all of its horrible impacts, there are numerous solutions to save their marriage if they are honest in their intention to mend their husband and wife partnership.

What Things weaken the marital bond?

Many husbands and wives frequently behave more like competitors than like partners. The husband claims that he is in charge and that everything depends on him. The wife believes she should throw as much stress as possible on her spouse. Many wives never express their satisfaction with anything their husband can do or provides them in an effort to drive him into doing or purchasing more. If he fails to provide them with the living that their relatives and friends experience, they let their husbands feel like a failure. Many spouses verbally and physically mistreat their wives, speaking to them indecently. Their wives do not have a part or a voice in the home.

Small Things which Husband and Wife should do

Following are some small things which do not cost many efforts but these things would definitely strengthen the relationship of husband and wife.

• Both should consider each other while making decisions

As a couple, the Muslim husband and wife must make decisions by discussing with each other. When everybody believes that they had a voice in the decision-making process and when decisions are not forced, there will be considerably more peace in the home.

“I asked ‘A’isha, may Allah be pleased with her, ‘What did the Prophet, may Allah bless him and grant him peace, do when he was with his family?’ She replied, ‘He would do chores for his family, and when it was time for the prayer, he would go out.'” [Bukhari Al Adab Al Mufrad-Sahih]

The above hadith clearly shows that how our beloved Prophet Mohammad (P.B.U.H) used to involve at home with his wives.

Partner should never abuse his/her spouse physically, psychologically, or emotionally. The Prophet, may Allah grant him peace and blessings, never harmed his wives. Prophet Muhammad (P.B.U.H) has said that “How could they treat their women like slaves by beating them during the day and then sleeping with them at night?”

The best way to take care of language is that husband or wife should never talk when they are angry. Because, sometimes it happens that a person become harsh and abuse in anger when he/she regret later.

• Showing love towards your spouse

Husbands and wives should notice each and every detail of their partners. Whatever, a person does for spouse; spouse should appreciate those efforts by at least speaking encouraging words. This will motivate a partner to do more in a marriage which would ultimately leads to strengthening the bond between husband and wife.

However, spouses should keep in mind that efforts cannot be one sided but from both sides. If one person is careless and only the other partner is making efforts then one sided efforts would also go waste. In order to make a marriage bond successful, both partners should make equal efforts.

As Allah has also mentioned beautifully in Quran:

“And of His signs is that He created for you from yourselves mates that you may find tranquility in them; and He placed between you affection and mercy. Indeed in that are signs for a people who give thought” [Quran 30:21].

• Considering your spouse as your best friend

Man/woman should be responsive to the partner's life. Husband and wife share a home; but if they are unaware of one another's life, their bond would suffer a lot. If the husband and wife

could engage on a similar activity or for the same purpose, that would be great for building the trust between each other.

• Acknowledging efforts of each other

Wife would feel appreciated and driven to continue the complicated tasks she undertakes if her husband expresses his gratitude and acknowledge her efforts. Additionally, it implies that if husband is thankful to his wife, he should also be thankful to Allah for providing him with her company as Allah swt is the one who provided him the chance to become a husband of a wife who makes efforts for him. Husband should thank his wife frequently, he should let her know how much he value all of her work and efforts, and thank Allah for her company.

Similarly, wife should also be mindful that she should never miss a chance of thanking her husband for doing efforts. She should often compliment her husband on his looks, or dressing, or the way he treats her. These compliments would make a man feel the perfect husband and when he feels that he is the perfect husband, he would be conscious about his actions even more to never let his wife’s hopes down.

And ˹remember˺ when your Lord proclaimed, ‘If you are grateful, I will certainly give you more. But if you are ungrateful, surely My punishment is severe. [14: 7] ”

Hence, all of the above points referring to the Islamic teachings that how Islam has beautifully taken care of rights and duties of both husband and wife. Also, Islam has not missed out any small detail, rather Allah and His Prophet Mohammad (P.B.U.H) has asked spouses to take care of small things as well when it comes to creating love in a marriage. SubhanAllah!