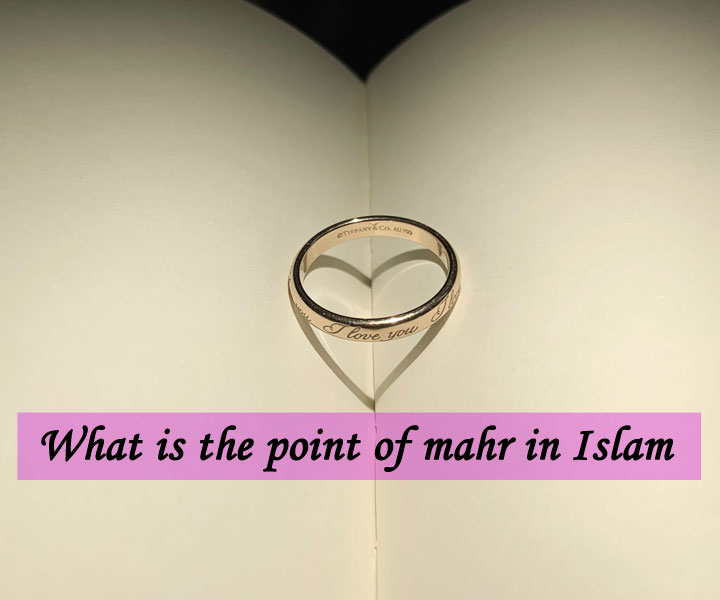 What is the point of mahr in Islam - NikahExplorer

Haq mahr is the main aspect of nikkah and it is imperative upon a groom to give it to his bride.

The gift of marriage (Mahr) is a sacred command. Mahr may either be provided forthwith or given on credit. It may be the liability of the husband or someone else who wants to pay it, and relies on the couple's mutual consent.

As it is stated by Allah;

What is Mahr and why it is important

The future wife before marriage must be concluded with a Muslim husband about the financial commitment. This money is referred to as the mahr and is a payment to the bride she wants to keep. This is because if the girl doesn't have anything, this way she is a bride with her property. If the wife later asks for a divorce that the husband does not like, she will return her money to him and get the divorce known as Khula. Usually, the wife will be allowed to hold the mahr if a divorce happens for the ordinary purpose. Allah says in Surah An-Nisa, verse 20:

“But if you want to replace one wife with another and you have given one of them a great amount [in gifts], do not take [back] from it anything. Would you take it in injustice and manifest sin?” [4:20]

It is also stated in the following hadith as well,

“You are not entitled to take back any money. If you have told the truth, the Mahr that you paid, was for having sexual relations with her lawfully” [Sahih Bukhari].

Mahr is a symbol of the responsibility of the husband and it is necessary to pay the bride with currency, properties, or movable objects. The mahr sum is not legally fixed but it is suggested according to the present social standard. The mahr may be assessed at the time of marriage to the bride or postponed to a later date, or both. Yet in case of death or divorce, the delayed mahr falls off.

“Surely Allah will forgive any sin on the Day of Resurrection save the sin of one who misappropriated the Mahr of a woman or the wages of a hired person, or who sells a free person (as a slave).”

What is the point of Mahr?

Before marriage a Muslim husband must negotiate a financial arrangement with the prospective wife. This present money is known as the mahr, which is a gift given to the bride that is her own to hold and to use as she wishes. The explanation is that even if the girl doesn't have anything she becomes a bride with her own house.

(650 CE; 28 AH), popularly referred to as Umm Sulaym by her kunya, has been one of the first women converted to Islam at Yathrib (now Medina). Umm Sulaym first became married to Malik ibn an-Nadr and Anas ibn Malik, a prominent companion of Muhammad, was her son by this marriage.

What is the best Mahr?

As per to hadith, the Muslim Prophet Muhammad (P.B.U.H) said the mahr should be "one piece of gold," however the mahr sum is often agreed between the bride and groom's parents or guardians (also called wali), as well as the parties often formulate mahr contracts by filling in the blanks of form contracts.

Thus, all of the above hadith and verses of Quran state that mahr is the most important requirement when it comes to nikah. And mahr is the right of bride which must be given to her and she has also the right to keep the mahr with her even if she gets divorced after nikah.