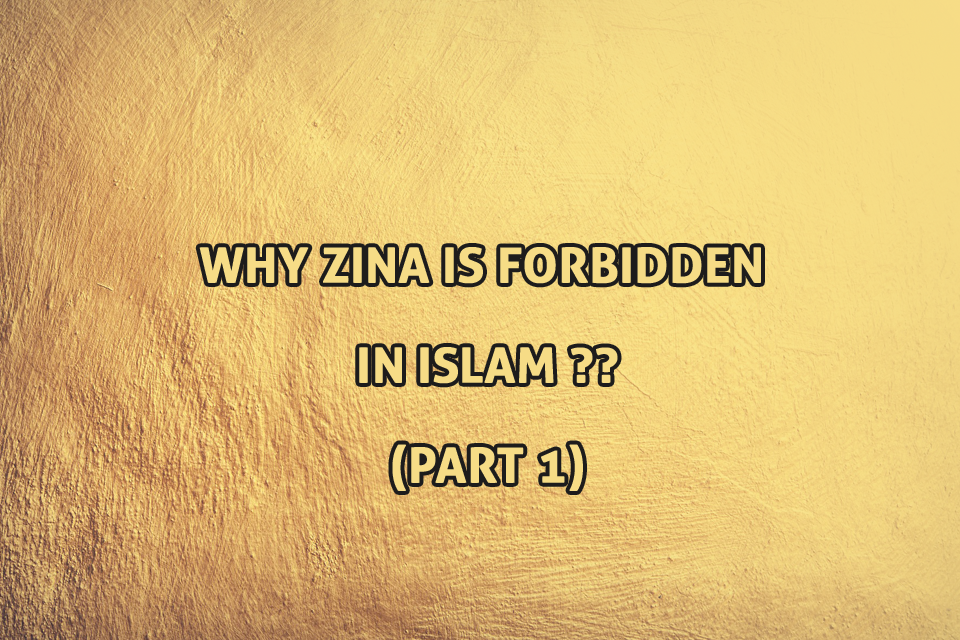 Why Zina Is Forbidden In Islam (Part 1) - NikahExplorer

Islam has set certain limitations, rules, and regulations for doing the things. If Islam forbids something then at the same time Islam explains the reasons too, that why some acts are Halaal and why some deeds are Haram. There are some acts for which Allah has shown us the way of doing them, if we do not follow the things according to the mentioned ways, our acts will then become haram. One of the major examples of this is ‘zina’.

Zina is an Islam term for an illegal sexual intercourse. Zina includes adultery, fornication, prostitution, rape, sodomy, homosexuality, incest, and bestiality. Allah says in Quran in various places that zina is the most disliked and sinful act. Allah has clearly mentioned in Surah Al-Isra, verse32:

“And do not approach unlawful sexual intercourse. Indeed, it is ever an immorality and is evil as a way”. [17:32]

It is also mentioned in Quran in Surah Al-Furqan, verse 68:

“And those who do not invoke with Allah another deity or kill the soul which Allah has forbidden [to be killed], except by right, and do not commit unlawful sexual intercourse. And whoever should do that will meet a penalty”. [25:68]

Zina is the worst act not only in Islam but in scientific point of view too. It affects the human psyche a lot. If the two parties commit zina with a mutual agreement then this act leads to the addiction and people get habitual of this unlawful act. On the other hand if the person is doing rape (doing zina forcefully with someone) then he or she will affect another person’s psyche, he or she is destroying the mental health of another person. Hence, zina is the disastrous act in any of the way. This act can destroy the life of a person in this world and in the next world too.

Zina is no doubt an evil act and Allah has forbidden the Paradise on every evil person. Allah says in Quran in Surah An-Nahl, verse32:

The ones whom the angels take in death, [being] good and pure; [the angels] will say, "Peace be upon you. Enter Paradise for what you used to do." [16:32]

The similar relevant saying of Allah is, in Surah Az-Zumr verse 73:

But those who feared their Lord will be driven to Paradise in groups until, when they reach it while its gates have been opened and its keepers say, "Peace be upon you; you have become pure; so enter it to abide eternally therein," (they will enter). [39:73]

The above two verses clearly show that only people with the good character can enter into the Paradise and no individual who used to commit the forbidden acts can enter in the Paradise.

Being a Muslim we need to stay away from the things Allah has forbidden. If we try to resist ourselves and to hold ourselves against such unlawful acts then we will have a reward for that. In Islam struggling against the self, means Jihad al-Nafs, has the great reward.