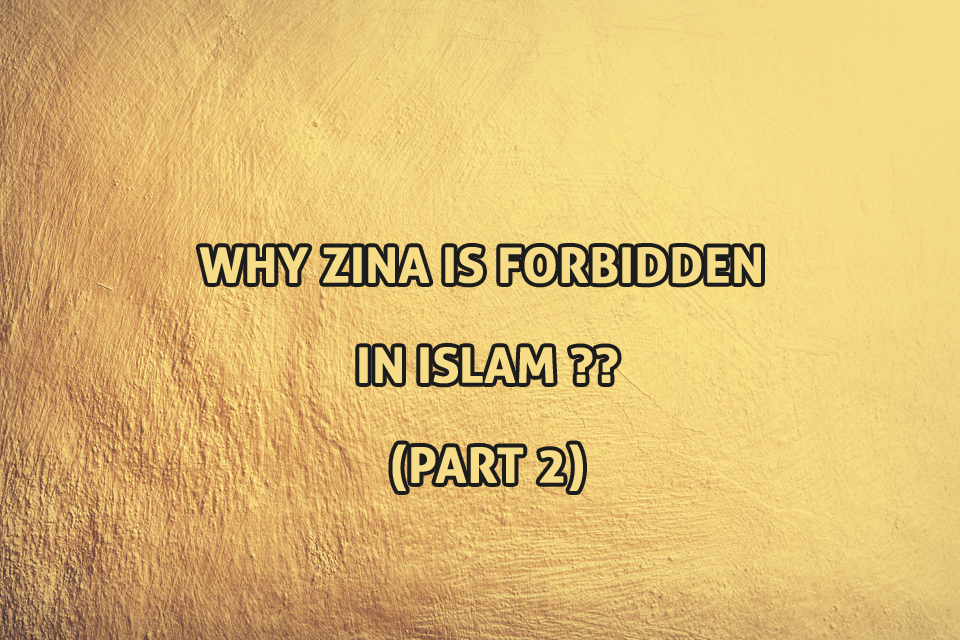 Why Zina Is Forbidden In Islam (Part 2) - NikahExplorer

Zina is considered as one of the major sins along with alcohol and gambling. Allah states this clearly in Surah Al-Maidah, verse 90:

“O you who have believed, indeed, intoxicants, gambling, (sacrificing on) stone alters (to other than Allah), and divining arrows are but defilement from the work of Satan, so avoid it that you may be successful”. [5:90]

The above verse starts with the call “O who you have believed” , which means that the things which Allah has forbidden in the above verse are not for the believers, hence it implies that whosoever will try to commit these forbidden acts are not among the believers. The same statement is clearly explained in the following hadith,

Since adultery is the biggest of sins, therefore keeping the self away from such deeds have the greatest reward too. Allah states this beautifully, in Surah An-Nisa, verse 31:

If you avoid the major sins which you are forbidden, We will remove from you your lesser sins and admit you to a noble entrance (into Paradise). [4:31]

To avoid the major sins, as a Muslim we need to follow the Islamic teachings, because the remembrance of Allah and the instructions given in Quran and Hadith can save us from so many sins and bad deeds. Prophet Mohammad (P.B.U.H) said,

“The five daily prayers, from one Jummah to the next Jummah, and from one Ramadaan to the next Ramadaan, are expiation for whatever (sins) come in between, so long as one avoids major sins.” [Muslim (233)]

To have benefits and rewards in this life and the next life, we must need to have the complete knowledge of what Allah has said in the Quran and through His messenger (P.B.U.H). If we will study the Quran thoroughly, if we look deeply that why Allah has asked something to do and why something is asked to avoid, we will ultimately find the true reasons behind every statement of the Quran, and if we understand the true reasons there is no chance of going on the wrong path. A person who does good deeds and who fights against the evil will indeed get a good place in both worlds. Allah says in Surah Al-Furqan, verse 71:

“And he who repents and does righteousness does indeed turn to Allah with [accepted] repentance”. [25:71]